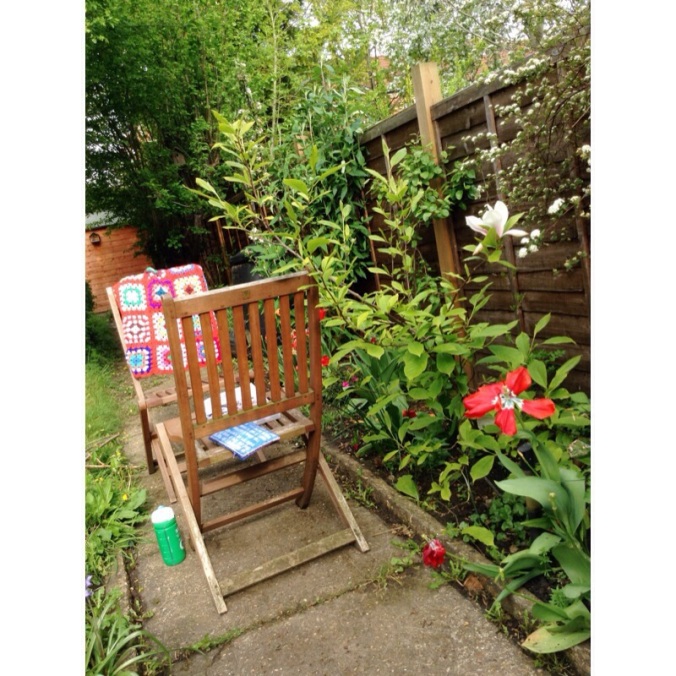 Help. We are under attack from dark forces. When I started drafting this blog post, things in the veggie patch were going so well. The wet winter had nourished our clay soil, while the late spring/ early summer sun was encouraging things to bloom. Seedlings sprouted. Fruit plumped. Flowers blossomed. Peas climbed to the sky up the pyramid I’d lovingly constructed from coppiced hazel and string saved from vegetable boxes. But then the rain returned. And with the resurgence of the non-stop Thames Valley drizzle came the mollusc menace.

So far the snails have eaten fledgling French beans, courgettes, tomatoes and marigolds. They’ve taken a good chomp out of most of the leaves on the broad beans and sweetcorn. Even ornamental plants are not safe, it appears, as they have stripped the leaves on my brand new lupins and the phlox I bought back from my beloved Dungeness.

But what can we do? Being rather organically minded, a bit of a pacifist hippy plus concerned about cats, hedgehogs and small people that roam our garden, I am resistant to reaching for the pellets. Last year I tried copper tape, to no great effect. The Aussie has bravely offered to donate some of his beer stash to make some traps, though I’m not fond of the idea of drowning the poor slithery guys, however delicious a substance it may be in. Part of me wonders if I should just let them be? Is this not nature is action after all? Maybe I should just live and let live? Maybe I could negotiate with their shelled leader about them beating a hasty retreat to next door’s rather neglected patch of land and leaving my treasured veggie patch alone? All I know is that we are not going to get anywhere near my ‘Good Life’ dream with these fellas around.

Do you have any suggestions on how to deal with slugs and snails? I’d really love to hear them. Help me, you’re my only hope.

One thought on “The Veggie Patch Diaries: May”

I really appreciate all the love on my previous post, just to answer some frequently asked questions: . . • I devise all the educational content of my sessions, I don’t use any curriculum. What we do is based on observing the interests of the children and scaffolding learning opportunities on to those interests. I tend to use a mixture of schema and the zones of proximal development theories. However, it is largely just paying a lot of attention and respecting the child. I have no intention of publishing a ‘Beach School Curriculum’ because it is not in line with my Forest Schooling ethos. Though I am always deeply flattered to be asked. . . • About 80% of our resources at our sessions are made by me, so I love being asked where they are from! We are also very fond of the occasional marine citizen science activity. However, if you look on my website, you will also see that a little ‘shop’ button has appeared, which is a bit of a clue to what is to come... . . Do you have any other questions? I’m here today for any Beach Schooling/ Forest Schooling/ Outdoor Learning/ Early Years etc queries...
Part of our philosophy at Little Gulls is nurturing real connection with the nature around us. We follow the children’s interests and build on those, rather than asking them to remember a list of names. Cultivating connectedness provides an emotional foundation for future relationships with the natural world. . . But it’s not something just for an outdoor learning group, we can incorporate this in to our every day lives. If you are out on a walk - on the beach, in the woods or in the park - try nurturing a deeper connection with the nature you find. . . Rather than naming names, why not try asking: • Is it a plant or an animal? • What colour is it? • What part of the creature do you think it is? • How many legs does it have? • What part of it left this mark? • Where does it live? • What does it eat? • Does it move fast or slow? And the most important question of our time: • How does it poo...?* . . . . * I knew you’d ask. Cuttlefish are cephalopods, like octopus or squid. The Marine Detective says that cephalopod waste comes out of the stomach into the intestine and moves it along till it eventually reaches the end of the intestine located at the entrance to the funnel. Cephalopod poo, ejected from the funnel, looks a bit like a slender ribbon. You are very welcome 🐙
“Please don’t rush me to write, I will soon enough. But right now there are more important things for my hands to do...” - Sarah, How Wee Learn
In the past, as an urbanite, I paid little attention to the Moon. I frequently gazed at the nights sky, I knew the Moon had phases, I knew it was up there playing gravitational games with the Earth. But I never really paid it any real attention. . . Until I moved to the coast. Now, everyday, I witness the power of the Moon to move the Earth’s water and it blows my mind. I look up phases to see how high or low the water will be. I began to read about, and pay respect to, religions and cultures that, unlike my own, never lost sight of what a lunar month actual means (and to whom I give thanks). I now incorporate gentle opportunities to learn about the lunar calendar in to our Beach School practice, because it has such a profound impact on where we learn and play. . . This year, thanks to the information in the brilliant Almanac, by @lia_leendertz , I’ve renamed our Beach School terms from their mainstream names to ‘Lenten Moon’, ‘Mother’s Moon’ and ‘Rose Moon’, the medieval names of the full moons that fall within that term. So we can start to acknowledge all the natural forces that shape our environment on the Beach. And, as some suspect, all the natural forces that send both big and small people a bit wild too... . . Do you look at the phases of the moon? How do they impact your life? I’d really love to know 🌝 You can check out our new Beach School term dates on our website too.